Back to: Atlas
HULSIUS, LEVINUS ACHTZEHENTER THEIL DER NEWEN WELT… HERRERAS ATLAS AND DESCRIPTION OF THE 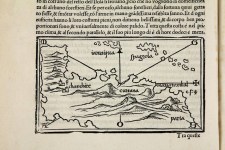 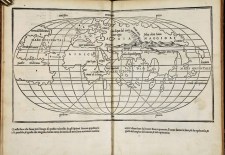 Title in engraved scrolls printed in red and black

Second edition of this important atlas, published in June 1534.The atlas includes the first edition of the oldest known report on Pizarros conquest of Peru and his victory over the Incas on March 15, 1533.


The modern mapping and atlases of the world (Forlani; Ortelius; Mercator) were preceded by mapping from different conceptual worlds. The most important was the Ptolemaic geographical concept. Others were Christian geographical concept as in Mappa Mundi and another, again, the Isolario concept of the world. Modern mapping started when the results of the voyages of discovery came in and the first modern worldmaps and atlases were constructed. The Isolario tradition was born from the intensive, maritime mapping going on the Mediterranean for thousand years or more. Together with portulanos, descriptions of maritime routes, these isolarios guided the sailors. The printed expression of this isolario tradition are (first) the della Sonetti atlas (circa 1480) and the second is this one, the Bordone atlas. The della Sonnetti atlas is limited to the Mediterranean; the Bordone atlas is the first to depict the whole world as a series of islands.

Bordone tried to explain and map the world as a collection of islands, spread over the globe. A few overview maps (World; Europe; Aegeus) were used to give the islands a place on the globe (Ginsberg).

In the 1528 edition of this atlas we find what long was seen as the first world map on an oval projection. Later the Rosselli map (1508) was found and promoted to be the first one, copied by Bordone. Or was it vice versa?? Shirley tells us the Venetian Senate gave Bordone a licence to print a world map as early as 1508 !! There are important differences between both maps. Rosselli connects Asia and the Americas, Bordone does not. Rosselli shows a serious Antarctica (on both his known, surviving world maps: (Shirley 28 and 29), Bordone does not.

A special value of the Bordone maps rests with the Terra de Lavoratore map in verso of A 6, folio 6. Thomas Suarez convincingly argued (Suarez 1966) that the map does represent the whole of North America, and thus is the first printed map, dedicated to North America alone. The continent of the Americas would be split by a sea strait, Stretto on the map, which separates North from South. By placing the uncoordinated Lavoratore map into the world map (as it was meant to be done) one would place that strait at about 10 degrees North. South of that strait is Parte del Novo Mondo.

This generates an exciting possibility that has not been discovered as yet. The map of Paria (at B5 verso; Folio 11, verso) is the continuation of the Lavoratore map and continues from the strait as mentioned there southward showing Mexico, Central America and the Northern part of South America (Paria). So both maps together give as early as 1528 (certainly) or even 1508 (possibly) an image of the whole American continent, North and South together !!!

There are other important maps in this atlas, including the first printed map of Japan (only discovered in 1543) and early and important maps of Cuba, Jamaica; Cyprus and Scandinavia and impressive views like the plan of Tenochtitlan and the bird eyes view of Venice.

The report on the victory of Pizarro over the Incas is on the last two pages of the book. It is a letter of the Governor of New Spain (Mexico) to the Emperor in Spain. In the letter the Governor reports the arrival of a ship from Nicaragua that carries the news of this victory on March 15, 1533. However, the news was already known in Spain as four ships had arrived with news and filled with treasures. This was in December 1533; January 1534 and two in June 1534. The first ship was captained by Christobal de Mena and the second by Hernando Pizarro, the brother of...