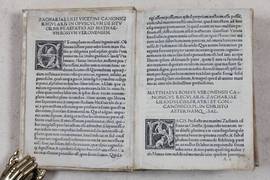 2. No title: including Contra Antipodes

One OT and one zonal worldmap (A 6 in verso)

His orbis breviarum remained for a long time a popular manual of Geography and Cosmology (Norderskiold). Earlier editions in Florence (1493) and Naples (1496)

In small quarto. Recased in old, plain vellum. Leaves a1 and a2 with marginal restorations, including some letters in manuscript. Seven leaves in good facsimile on old paper. Heavily but well restored copy.

Leave 71: register and (in verso) a device, repeated 3 times, probably the arms of the Piscia family who ordered the book printed.

The TO worldmap (Shirley nr 1; Campbell, nr 86) is surrounded by the 12 winds, each named. This TO worldmap, as the first one printed (in 1472), but more like an extended version of the Dati worldmap (Dati: La sfera, Florence, c 1495) (Campbell, nrs 71 and 72). The map in this part first appeared in Lilius Orbis breviarum (Florence 1493) in red & black and is described by Campbell as the "basic map reduced to its simplest form"

In his second treatise: Contra antipodes, when talking about islands in the oceans of the world Lilius remarks under the heading Navigatione Oceani Maris (folio f2 in verso) that ..ut quo tempore navigatus fit oceanus paucis exponant: ... Rex Hispaniae ut fuerunt in dies ad exploranda nova littera, naves mandat that is " (an Ocean) little known in spite of earlier voyages... where the King of Spain sends his ships to explore new coasts" .

On Lilius 1496: no copies sold in the Anglo-Saxon world through auction in the last 30 years. Sabin: "extremely rare " .

First and only edition of three tracts of the Armenian bishop and cosmographer Zacharia Lilio.

In this last treatise the sky and its inhabitants and phenomena are described and analysed according to classical writers and the church authorities.


Lilius (or Zacaria Lilio) was born in Vienna 1452 and died in 1522. He was bishop de Sebasti in Armenia. That this Sammelband is presented in spite of its shortcomings has three reasons. First it is extremely rare. Second it contains two early TO worldmaps. Third it is an early, very early Americana (Harisse, nr 17!!!)